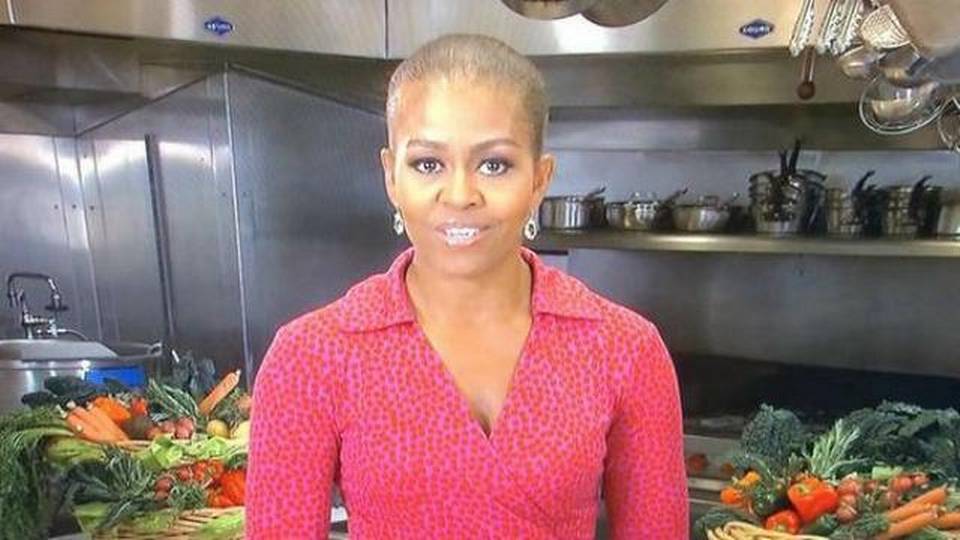 There have been whispers in the corridors of power inside the Washington, DC beltway that Michelle Obama has been dropping more than a few taxpayer dollars on wigs that seemingly change by magic her hair from cut bangs to flowing tresses. Amazingly enough, both styles are of noticeably differing lengths, despite denials by the White House. Yet what has the Twitter universe in full meltdown mode would be her recent appearance on an American game show that clearly reveals a Mi-Mi minus tresses that may have surrendered to stresses. In other words, why is the First Lady of the United States (FLOTUS) sporting a buzz cut if not flat-out bald?

As reported by The Kansas City Star on March 25, 2015, and also the government-centric The Hill news portal on March 24, 2015, the FLOTUS appeared via prior recorded tape on the iconic quiz show Jeopardy! to provide the answers of the glory of Butternut Squash and why we should wash canned veggies before consumption. With it yet to de determined of Mi-Mi’s appearance on Jeopardy has made any impact on more Americans embracing her Let’s Move! initiative to battle childhood obesity, Twitter was clearly alight with stunned viewers asking why Mrs. Obama has embraced a noticeable lack of her trademark shoulder length hair.

Despite the FLOTUS sporting togs that accentuate her rather broad shoulders and bulging biceps rather than her chrome dome, citizens took to social media somewhat in a state of shock. While Alana tweeted “Michelle Obama is on jeopardy but her hair is not??”, fellow tweetster K opined “My dad just said Michelle Obama is bald because she doesn’t eat”.

Allison Samuels of the left-leaning The Daily Beast proffered up in 2013 an explanation what may prove to be prophetic. Noting that “women of color” often suffer from high levels of anxiety for many women of color, Samuels penned that “Lengthy, flowing hair has routinely been considered the gold standard by which women of color are judged. Long hair and skin of a lighter complexion have traditionally been seen as landmarks of a more mainstream and, therefore, more acceptable beauty.”

The DB reporter noted that many black women frequently resort to heat styling and chemical procedures to attain flowing follicles. Unfortunately for the women of color in question, Samuels correctly cites that too much heating and too many chemicals “present significant roadblocks for sustainable hair growth.”

Not done yet dishing the dirt, the reporter also penned “No stranger to the politics of hair, Michelle Obama sought professional assistance for her thick, shoulder-length mane while still in high school and kept a weekly, standing appointment with [former hometown stylist Michael “Rahni”] Flowers to maintain the style and health of her tresses right until she left for her new address in Washington.” With many questioning if Michelle Obama has actually seen her hair swirl the drain, The Hill’s Judy Kurtz did reach out to the White House asking officials for more information about the Mrs. Obama’s appearance on Jeopardy but they “didn’t respond to a question about the ‘bald buzz'”.