When the Spanish Flu ravished the planet from 1917 until 1921, no one really has a solid number of how many lives it took. After all, communications at the beginning of the 20th century were still fairly crude by today’s standards.

With that aside, the planet’s population was estimated at roughly 1.8 billion. At least most researchers agree upon that. When it comes to how many people died of the Spanish Flu, that’s where the the estimates start to vary wildly.

As noted by the everything-brainiac website OurWorldInData.org, one estimate is as low as 0.95 percent, another as high as 5.4 percent.

Just for the sake of argument, let’s say that 5.4 is the correct number. That means that roughly 1.4 people out of every 25 ON THE PLANET died because of the Spanish Flu. Unlike today’s COVID-19 taking out the elderly and sick, the Spanish Flu was especially deadly for the young and strong.

I had to go back pretty far, but I did find a PBS article from 2008 that cited that some rather elderly folks at the time were tested to see if antibodies against the Spanish Flu were still active in their immune system.

Not only were their immune systems still producing antibodies, but the “Researchers injected the antibodies into mice, and found that they were powerful enough to protect the mice from a reconstructed version of the virus.” 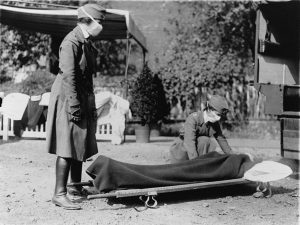 Then I recalled how President Trump was raked over the coals for suggesting that “herd immunity” would eventually lead to COVID-19 burning itself out (video below).

After I found evidence of the Establishment Media doing everything in their power to body slam President Trump along with the notion of herd immunity, I wanted to see what the government had to say on the matter.

From the official website for the National Institute of Health (emphasis mine);

The researchers found durable immune responses in the majority of people studied. Antibodies against the spike protein of SARS-CoV-2, which the virus uses to get inside cells, were found in 98% of participants one month after symptom onset.

As seen in previous studies, the number of antibodies ranged widely between individuals. But, promisingly, their levels remained fairly stable over time, declining only modestly at 6 to 8 months after infection.

Well, well, well. Looks like President Trump was right after all.

With that said, if a retired Marine Corps enlisted man can find this information, then why can’t the alleged journalists at CNN, MSNBC, the New York Times, and the Washington Post do the same?