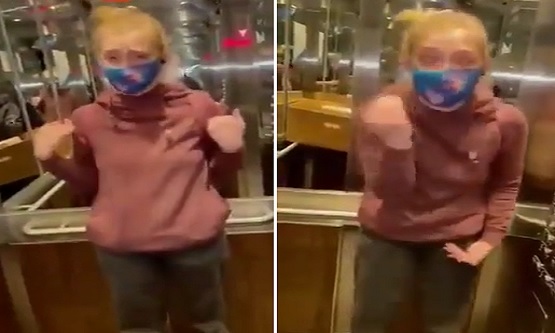 Way beyond a spoiled brat. This gal has more issues than TV Guide.

Just when I thought I has stumbled upon the ultimate Karen(s) meltdown (second video below), not even 48-hours later I have to admit I was wrong.

I get it that this particular video is slightly more than a year old, but wow. Just wow.

The lady being flipped-out on in the video has an accent I just can’t quite place… Eastern European?

Anyhow, I just hope she doesn’t think all Americans are as fragile as this precious snowflake.

Hopefully for the flip-out-er, she’ll marry well. After all, this maturity-challenged little snot won’t last five minutes in the real world.

More mask madness, this time in an elevator. The mask police are really nuts pic.twitter.com/3BpvLjdJwD