The Ringling Bros. and Barnum & Biden circus is in town… and brother, this is a clown show to end all clown shows.

Just this past Sunday, Secretary of State Antony Blinken, who perpetually looks like a scared cat, told the world that if the Polish government so desires to transfer ownership of their entire fleet of MiG-29s to the Ukrainians, Blinken says that as far as the US is concerned, the plan has the “green light”(see video below).

.@SecBlinken: The U.S. has given the “green light” to NATO countries if they choose to provide fighter jets to Ukraine, one day after President Zelensky made a plea to members of Congress to provide them during a Saturday Zoom call. https://t.co/liDkdNCAFI pic.twitter.com/3vHqk6YzQe

Ahh, but if only the Biden Administration wasn’t just the biggest taxpayer-subsidized amateur hour in history. Seriously, the right hand has absolutely no idea what the left hand’s doing.

As noted by AFP (Agence France Presse) via Barrons.com, Team Biden has just squashed any plan whatsoever of those Polish jets ever fighting for Ukraine.

As reported (emphasis mine);

The Pentagon on Wednesday offered a conclusive rejection of a plan to transfer fighter jets from Poland to Ukraine to battle Russian forces there, saying the “high risk” move could have been interpreted as an escalation. 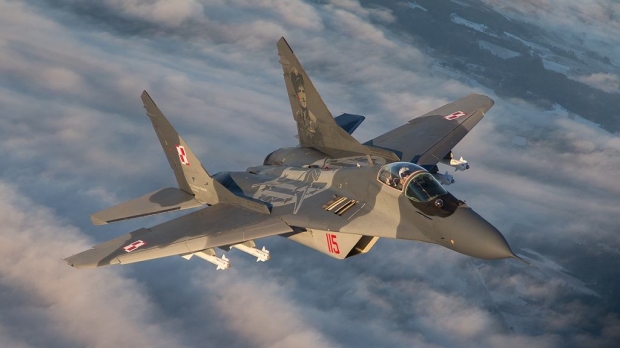 MiG-29 of the Polskie Siły Powietrzne.

The issue of the jet transfer, which Ukraine’s leadership has been eager to see resolved as it seeks to counter Russian aggression in the skies, has proven to be a notable hiccup in the otherwise solid alliance between the United States and its European allies over Moscow’s invasion.

“But he stressed that we do not support the transfer of additional fighter aircraft to the Ukrainian Air Force at this time, and therefore have no desire to see them in our custody, either,” Kirby said.

Pentagon spokesperson John Kirby pours cold water on the transfer of Polish jets to America to give to Ukraine:

“We do not support the transfer of additional fighter aircraft to the Ukrainian air force at this time, and therefore have no desire to see them in our custody.” pic.twitter.com/SSgUOBpwZh